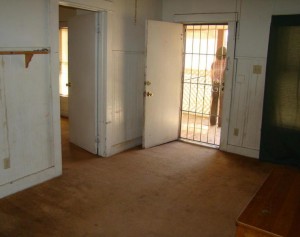 It just needs new paint. And new floors. And for people to not be in the real estate photos. Photo credit UglyHousePhotos.com

Real estate is an adventurous business. People are all fundamentally different and therefore, their living spaces or specific needs for a home will match this diversity. What happens, then, when a home being sold is cosmetically ugly, or even in disgustingly bad shape?

This is where Leif Swanson comes in. Leif is part of the Realty ONE Group in Arizona and runs a hilarious blog called Ugly House Photos. The blog is nearing its 7th birthday and gets over 3 million visits each month.

“I started taking and collecting photos of ugly decor, clutter, and poor home staging back in 2004,” Leif tells us at FedHome Loan Centers. The collections grew to slide shows he created through a visual tour program, until Leif graduated his photos over to the Internet.

The inspiration behind Leif starting this blog came with a property in 2004 he came across. Though it sounds like something you would see in “Alice in Wonderland,” mushrooms growing from the ceiling because of mold is not an ideal living situation.

“One of my fellow Realtors created her own blog in Spring 2008,” he shares. Leif collaborated with his friend to learn how to use WordPress and do HTML coding, which lead to the first Ugly House Photos blog post in November of 2008.

Leif, who has been featured in his local Arizona Republic newspaper before, has been very open to sharing his horror stories in real estate. Other than the mushroom house, he shivers at the memories of dealing with prospective clients smoking inside their home while a showing is happening. One home also stands out in his mind. 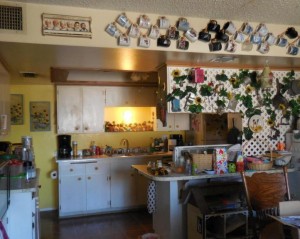 Isn’t the owner concerned that an earthquake could take out her mug collection? Photo credit UglyHousePhotos.com

“In 2002, there was this creepy house,” Leif recalls. “There were rubber bats hanging in the hallway, bedroom walls were painted black, and the living room had several huge fish tanks and terrariums.”

Other than those unsettling factors, the final straw was a death in the house. “The seller was home and said, ‘My iguana is dead,’” he states. “I grabbed my client and said, ‘We’re leaving now.’”

“I inherited a love for puns from my father,” Leif says about his humorous writing style. “I try to include puns and double entendre into my blog posts and titles.”

For the creepy house, the 203k home loan program through the FHA would have been an easy fix, since the federal loan allows buyers to borrow either the amount that the home costs with an estimate of repairs, or 110 percent of the home’s value so that repairs can happen. Although new paint and likely plastering over holes in the hallways would not be allowed for the streamlined 203k program ($35,000 for non-structural upgrades and repairs), the cosmetic issues of the creepy house would be easy fixes.

Has there ever been a home that Leif has seen where even the 203k would not help it? “There was this disgusting home in the middle of the foreclosure crisis in 2009,” The home had a collapsed roof, old food and garbage left out in the abandoned home’s counters in the heat, and a horrible smell.

“I used to wear ‘foreclosure shoes’ back then,” Leif says. “Cheap shoes for visiting run-down, dirty foreclosure homes with sticky floors, junk piles, and tall weeds in the yard.”

Leif is on the fence if the 203k would have done anything for the mushroom house. “Who knows if the buyer hired a professional for mold remediation, or merely painted over it?”

With all this in mind, what are some of Leif’s pet peeves and his advice of areas to fix before showing your property? “Clutter, unmade beds, toilet seats up, weeds, refrigerator magnets, dirty dishes, closed up curtains making dark rooms, and blurry photos,” Leif says. “Other pet peeves with real estate photos are pets or people in the photos, or a photographer’s reflection in [the] bathroom mirrors.” 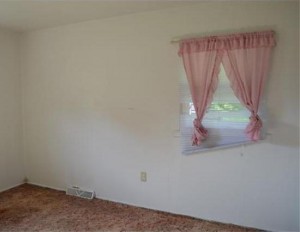 Knotted curtains are just one of the problems with this room. Photo credit UglyHousePhotos.com

What is his biggest aesthetic pet peeve of them all? “Knotted curtains. They buy curtains that are too long and don’t know how to sew,” he shares. “Or they knot them on purpose to irritate me. It is such an ugly look.”

For more information on the 203k home loan, or other federal home loans such as the FHA home loan, USDA home loan, or the VA home loan, call 877-432-5626(LOAN). You may also use this site’s chat engine, or tweet us at @FedHomeLoan.

We were skeptical that we could not get a house after our foreclosure. We are homeowners again!! by: E.D., Sand Diego, CA