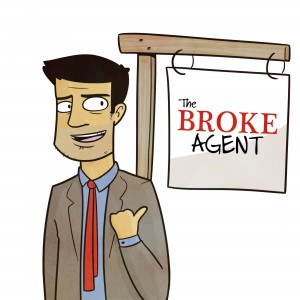 The business of buying and selling homes can be very stressful. It’s understandable – the commerce of real estate and brokerage in America in 2015 is currently worth $117 Billion Dollars with close to 1 Million people employed in this field.

Realtor®s are an essential piece of the real estate process. They are often the go-between for the buyer, seller, lender, broker, and everyone in between. Their jobs are very stressful, and the light at the end of the tunnel is getting a client into their dream home.

With so many people wanting a slice of the real estate market’s pie, there is bound to be competition, hurt feelings, wasted time, and miscommunication. That’s why it’s a treat that the guys of TheBrokeAgent are here to smash that real estate pie in your face.

Eric Simon and Wes Pinkston of TheBrokeAgent told us here at FedHome Loan Centers that they were a couple of stressed out real estate agents wanting a creative outlet to find relief with. “Our industry is unpredictable and full of both emotional and monetary swings,” they wrote to us. “We noticed there was a lack of alternative voices in real estate, so we decided to give it a shot.”

“We set out to capture the inner monologue of what actually goes on in an agent’s head throughout the day,” they shared. “We combined it with humor and satire, and it took off.”

TheBrokeAgent started out at first as just a social media project on Twitter and other channels. When they got good feedback from others, they expanded to their blog to speak further and develop their literary voices. It all came together with their comics in the end.

Eric Simon and Wes Pinkston of TheBrokeAgent at the Inman Connect conference 2015. Follow Wes & Eric at @TheBrokeAgent on Twitter

The main character and the symbol of TheBrokeAgent does not have a name. Wes and Eric say they nicknamed him “The BA” and “The Crow (because of all those Escrows).” Perhaps it is fitting that the character does not have a set name, since he can be the ultimate symbol for those who work in real estate and what they go through.

“We come up with funny scenarios that happen to us in and out of the office, and are relatable to the majority of agents,” they say. “Then, we write down what we want and how we want it to look.”

So, which one of them draws The BA comic strips? “We can’t draw at all,” they reveal, to our surprise. “A guy we know in Canada handles our comics. We give him the inspiration and he makes it happen. We both handle the social media and written content.”

The guys at TheBrokeAgent state that humor is the best medicine for the real estate industry, as well as for anyone with a demanding job. “Absolutely,” they say, “you are dealing with so many different characters throughout the day that you have to find humor in those situations to keep your sanity.”

With real estate being a very formal field, there are bound to be those more conservative who take issue with TheBrokeAgent. “Although most of our feedback has been really positive, there are a few groups/individuals who have expressed their distaste for our content,” they admit. “It comes with the territory, and we want to create controversy in an industry that is traditionally stale and stiff.” 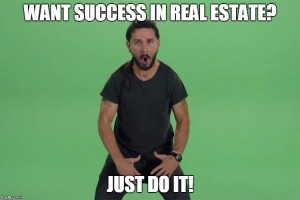 They have a very thick skin with the work they do and their take on hate in the industry, as well as a new social media approach, are refreshing. “If they don’t like it, they can unfollow us,” they proclaim. “It’s fun calling people out on traditional forms of marketing and their ‘salesy’ approach because that’s all the industry has ever seen…we have been taught and shown the same thing over and over. It’s time for a new approach.”

Our last question to Eric and Wes was which celebrity they would want to do the voice work for The BA, if it were ever an animated cartoon. The answer, given their humor, is both a surprise, and not a surprise: Shia Labeouf.

I just closed on my first home ever. I would definitely recommend this company as well as my wonderful agent. If you are looking for a company to help you purchase a home, FedHome Loan Centers is a good company! by: Martha H., Chokoloskee, FL